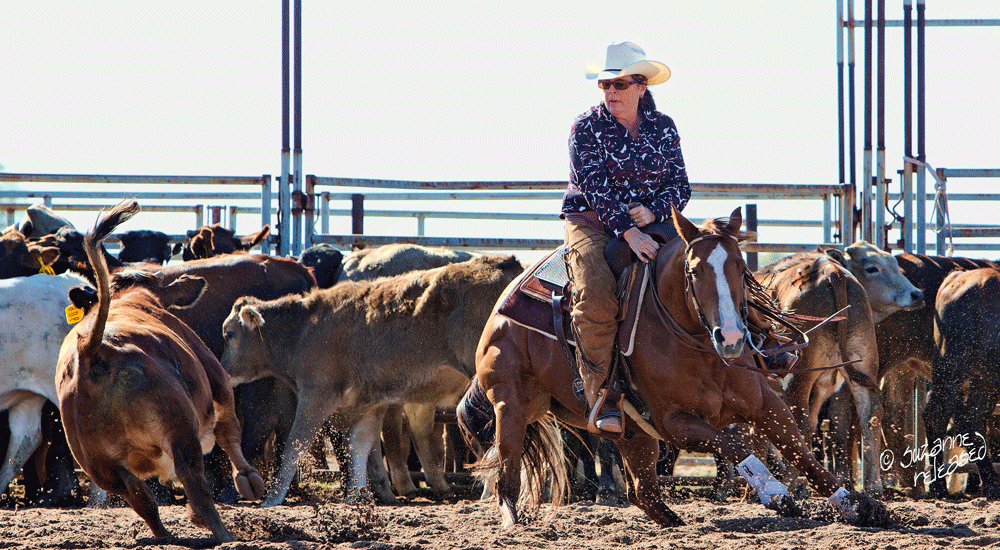 Working Through the Issues

Author: Lisa Haldane. I’m writing this to give you the perspective of an owner who has been attempting to excel in the sport of cutting, with what should be more than adequate financial resources, access to trainers, and good horses, but with limited and inconsistent success through 2014 (12 years into the journey).  The joy of this sport left for several years but I persevered because there is something precious at the core of it, something really special that is possible with these tremendous equine athletes and I’m looking for a better way.

The sport of cutting is unique amongst equine sports because the horse is thinking and acting at liberty, with no use of the reins.  This is not an exhibition of the freedom that the horse has, it’s a display of an extremely high level of training, discipline, fitness, and accuracy in both the horse and the rider.  I have much more to say about this, but the focus here is to present the story of a horse I owned with enough detail that you will understand the complexity of the issues that competitors can be dealing with. 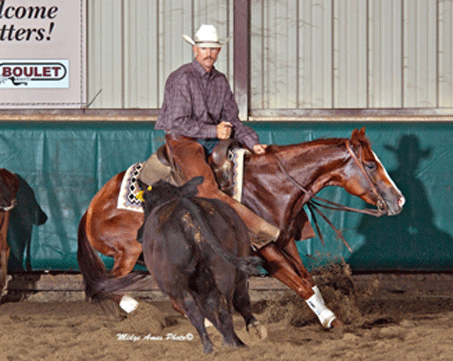 In this photo, Lilly is five years old and competing with her trainer at a cutting show in Tejon Ranch, California.  She did well at this show as part of the seasoning process to get her to the point where she would be solid enough for me to show her.  This was in August 2011, by May 2013 and she was still not solid enough for me to get through a class.  We purchased her for $25,000 and spent at least that much again trying to develop her.  To us, this was a lot of money, though to many in this sport it was not enough to buy a finished horse.  The trainer was thorough and cared greatly for this horse; it wasn’t an issue with training but with her health and my abilities.  Setting my abilities aside, I’ll tell you her story in the hopes that you will realize that there is so much more to the development and maintenance of a performance horse than you might think.  Being an equine bodyworker I thought I could work out her issues, but they were way beyond my ability to cope.

We purchased Lilly when she was a four year old after she had about nine months of recuperation from what seemed like an innocent injury that occurred during a show where she clipped her left front superficial digital flexor tendon with her left hind foot during a stop much like the one in the picture.  After I bought her the trainer put her back into training, showed her several times, and then I decided to bring her home to continue on with showing her myself.  Sometime between her last show and my home the left front leg became sore….

Over the next two years, we tried several approaches to recovering her for the show pen.  Throughout the entire time, I supported her with bodywork but this didn’t resolve any of the main issues.  She didn’t accept bodywork well, would try to bite and kick, so I found that I could really only work on her very lightly which actually taught me how much I could get done with very little effort, just softness.


Dr. Rich was suspicious that there could be pressure on the cervical nerves in the lower neck and also the spinal column in this area.  He did x-rays to confirm that she did in fact have a reduced foramen opening at several of the lower cervical vertebrae.  He also felt it was very likely that the joint capsules of these vertebrae had excess fluid build-up and were likely putting additional pressure on the nerves.

He found that she had a similar problem in the lumbar area due to the way she traveled in the round pen, not using her back, and her hind legs not coming up properly underneath her.

Dr. Rich did an ultrasound-guided injection of the joint capsules of the lower cervical vertebra and lumbar vertebra (see report).  Within 24 hours all the swelling was gone from her left front leg and to date, she’s not taken an unsound step.  It turns out the primary issues were:

Once sound, Lilly was able to be shown by a professional, but I was still not been able to get her through competitions without coming up against problems at the end of the run.

This is where my limitations became evident.  I ended up selling Lilly thinking that we weren’t a good fit and it took the next horse to teach me that my physical limitations and the way I was riding had the rest of the answer as to why I couldn’t get her shown.

She’s a powerful horse with a short back and hind legs that come deep underneath her in the stop, which lifts her back.  I had always been taught to sit deep in the saddle and press on the horn, which set me in the middle of her back such that when she would stop and make that powerful turn it would tend to bounce me right up out of the saddle.  I also learned that I had a rotation in my pelvis which resulted in me putting uneven pressure on my legs, which interfered with her ability to turn correctly.

There’s a hint in the photo above as to part of what I needed to do.  In this class, we actually had a really good run, and you’ll note that I’m not sitting back and deep, but am right up at the front of the saddle where there is the least amount of movement in her back, hmmm……

I ended up selling Lilly to someone who, fortunately, didn’t have these problems and she has gone on to be very successful for her new owner.

The points I want to bring out here are:

Attached below are Lilly’s neck radiographs showing significant narrowing of the C5-6 and C6-7 neural foramina, because of the enlarged arthritic dorsal facet joints. These enlarged joints can cause pressure on the nerve roots, or in more severe cases the spinal cord. 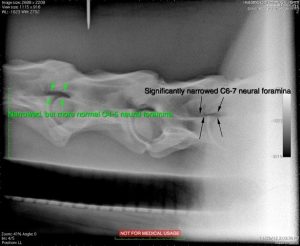 This mare has previously injured both front superficial digital flexor tendons, but they appear healed at this time. She has had some ongoing lameness issues that have gone undiagnosed. Today, she is 1/5 lame on the RF on circles to the left, and 1/5 lame LF on circles to the right. On the straight, she appears sound on both fronts. She has mild proprioceptive deficits in both hind, right hind slightly worse than the left hind. She has decreased lateral bending of the neck in both directions. The nontender to hoof testers both front feet. She does not canter normally behind either direction, on either lead behind. Holds her lumbar spine and pelvis rigid at the canter, and does not advance her pelvis forward normally at the canter. No stabbing of either hindlimb. 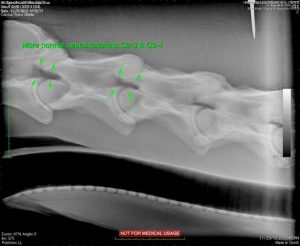 Please feel free to contact me if you have more questions. Thank you for the opportunity to evaluate and treat your horses. I would be happy to evaluate your other horse once the horse returns to Arizona. Just let me know.

Favorite Words from our Trainers
Go to Top